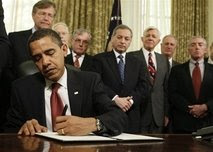 Obama signs order to close Guantanamo in a year.

President Obama ran his campaign demonizing Bush for the way he handled Guantanamo, water boarding and other interrogation methods. Now he is doing the same thing:

Required all U.S. personnel to follow the U.S. Army Field Manual while
interrogating detainees. The manual explicitly prohibits threats, coercion,
physical abuse and waterboarding, a technique that creates the sensation of
drowning and has been termed a form of torture by critics. However, a Capitol
Hill aide says that the administration also is planning a study of more
aggressive interrogation methods that could be added to the Army manual — which
would create a significant loophole to Obama's action Thursday.

He is planning to study more aggressive interrogation methods. Will Obama be demonized by the media and his democrats if it will be uncovered what kind of techniques he's going to approve to get informations from the terrorists?

We'll live and see. But I think it's funny how Obama is going to do almost the same thing Bush did, but one was sent to the drains and the other is raised to a messiah level. Shame!

I keep seeing these kinds of headlines:

That's in bold type. Then, underneath, in tiny letters:

Now that's more accurate. If you were to read the first headline you would think, "Holy crap! Our unemployment is the same as the end of the Great Depression!" If you read the tiny type you get a more accurate picture: there is a recession happening much like what happened in 1993. It still may get worse but that's where we are right now.

Further, the fail to tell you other facts:
- the jobless rate is at 7.2% which is obviously more than 5% but it's been fairly consistently under 5% for a good while. 5% used (back in the 1980s) to be consider the 'realistic absolute low point' for the unemployment rate. It was thought you couldn't go under 5% realistically so if you were close to 5% you were basically at 'full employment' for the population.
- 524,000 jobs is a lot of jobs but we also have a lot more total people working than we did back during the depression or before it. There are just more people working. A population of 100,000,000 working people losing 500,000 jobs is a lot different than a working population of 10,000,000 losing 500,000 jobs (I don't know what the figures were for working people in the 1920s and 1930s but our country has grown quite a lot since then so we obviously have a lot more people working).
- The Great Depression's unemployment rate topped out at around 25%. We're a long way from that. We've just gotten to the point where we were in 1993 which was a fairly minor bump. Even so, if you think about the way they portray the Great Depression it sounded like everyone was out of work. 1 in 4 was out of work. 75% still had jobs. I'm not saying it's good or that it didn't suck but it's just the way it's all spun that gets me.
- Government spending will get us out of this - What they fail to tell you is that 8 years into FDR's presidency he was pretty annoyed that the unemployment rate was the same as what it was when he took office.

There are some things that are good about recessions:
- if the government stays out of the way (which it won't but if it did) then labor prices will eventually get to the point where business people think, "hey, labor is cheap. I'll hire on a couple of extra guys and try to expand." You really can't do this like you used to because of various regulations like minimum wage. With minimum wage in place it makes it tougher to undercut the next guy in selling your product (you).
- It does give government a huge pool of people to pull from to build government work projects (like highways, bridges, military bases) at reasonable prices (again, if they got out of the way of themselves, in that example).

I don't even watch/listen to the news any longer because it's all the same, "Great Depression," crap which, at this point, really has no basis in reality. We're not even close yet. We just got to the moderately sucky times of 1993. We haven't even hit the suck-times of the 1970s yet, and we very well may not - no way to tell, with double-digit inflation and double-digit unemployment.

The biggest thing we have working against us right now is the lack of education in our own people. The current generation has been brought up to respond to any problem with, "There ought to be a law so the government can fix it." It doesn't even occur to them, "What can I do?"

I don't know how you fix that, either.

Still, the point being: We're not in a Great Depression yet - even will all the talk of it. I think it is possible that we could talk ourselves into one, though. Basically make everyone so fearful of spending any money at all that no one can sell anything and the economy, effectively, stops.

Good news, though: People are paying down their debts and putting money into savings. That's just a healthy thing to do.

Back to the Roots!

What is most impressive in the McGuffey readers is the morality. From the First
reader through the Sixth, the morality is pervasive and insistent, there is
rarely a page but addresses itself to some moral problem, points up some moral
lesson - industry, sobriety, thrift, propriety, modesty, punctuality - these
were essential virtues and those who practiced them were sure of success...the
world of the McGuffeys was a world where no one questioned the
truths of the Bible, or their relevance to everyday conduct.

This evaluation of the McGuffey readers by Henry Steele Commanger, a Columbia University and Harvard historian, educator and scholar, confirms that America and its schools once had a Biblical foundation which shaped the nation's culture and way of life. The books and the schools promoted character, responsibility and achievement. We can agree that that it will be hard to find men with the wisdom, courage, ethics and selflessness of George Washington, Thomas Jefferson, Benjamin Franklin or Abraham Lincoln among the political leaders of today.

America was once a society which had its roots in the Bible. The founding fathers were the product of western civilization. That civilization developed over several centuries after Gutenberg invented the printing press and published the Bible. In a Bible-based society, America grew great on a foundation of basic concepts. They were proclaimed in the nation's churches and taught in the nation's homes and schools.

For more than half the century, textbooks and other curriculum materials produced under humanist control have attacked and undermined the foundational concepts. We want our country back!

As soon as the second person appeared on earth, the rights of the first were cut in half. Now divide your rights by the total population, and that explains everything.